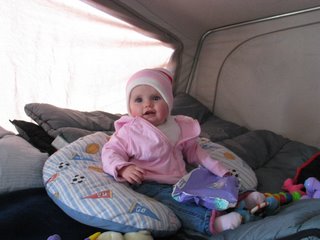 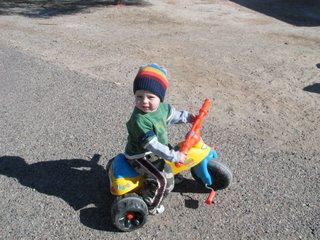 Matthew and his beloved Diego bike

This was Macey and Matthew's first camping trip. We joined Grandma, Becca, Hannah and Andrew over at Roker Lake State Park (near Safford AZ). Scott didn't come with us because he had to work (and because he hates camping). Even with out Scotty we had a good time. I think that Matthew was made for camping. He got to stay outside as much as he wanted, ride his bike all day, drink all the soda he could drink (thanks to Becca!), and eat tons of snacks. Michael and Macey had fun too. 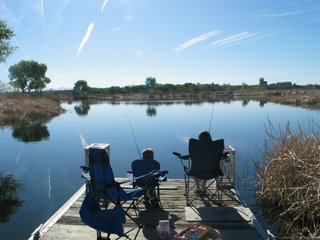 I took Hannah and Michael fishing a couple of times. I didn't fish because I'm too cheap to buy a licence. But it was fun teaching Michael how, and helping Hannah out. After a couple of lousy outings I started asking around for where we could fish. The second day we went out to another lake, and the ranger there showed us a good spot. About 10 minutes later Hannah had caught her first fish. Then Michael got a bite, and he reeled in his fish all by him self. I was pretty proud of him. While I was trying to get Michael's fish off the hook, Hannah caught her second fish. That was a pretty tricky time for me, because while Hannah enjoys the act of fishing, she doesn't want to have anything to do with the actual fish. So she reeled her fish in, but then wouldn't touch it, and I had to come over and get her fish too. When we got back to camp I started cleaning, and cutting up the fish, and Matthew thought that was pretty neat, and sat and watched me the whole time I did it. 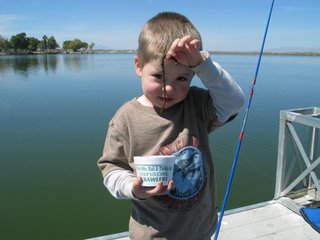 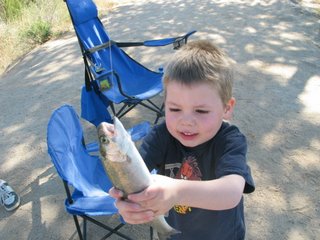 Michael caught the biggest fish that day. I told him to hold up his fish so I could take a picture... I guess he didn't know I meant by the line. It was funny... he just grabbed the fish. 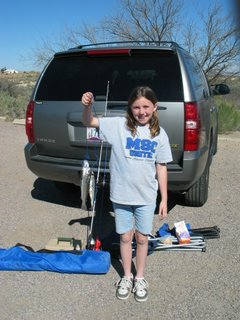 This is our cousin Hannah, she sure is a good fisher, and she did a good job of helping out with all the kids on the camp out, especially keeping Macey company. Thanks Hannah! 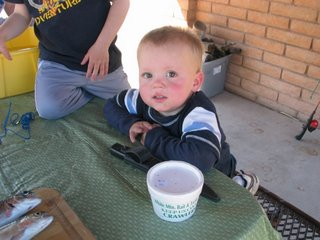 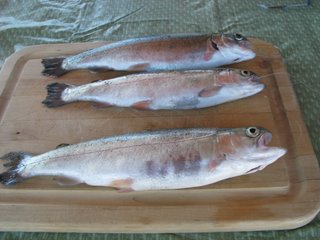 The top two fish are Hannah's, Michael's is the bottom one. 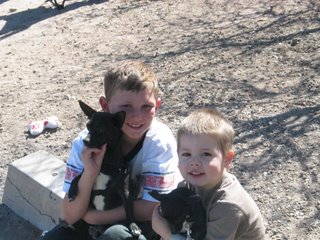 Here's Michael and cousin Andrew with the dogs Roxy and Socks (I think those are their names, but don't ask me which one is which). 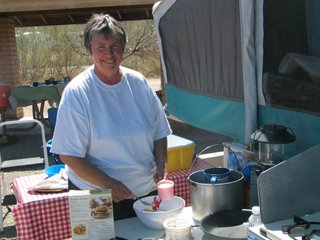 Grandma sure cooked some wonderful breakfasts.... we just won't talk about the dinners. :) 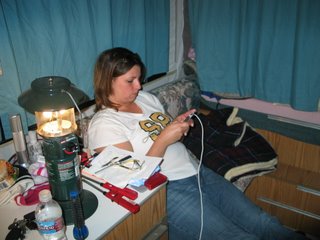 This might have been how Becca spend the whole camping trip. 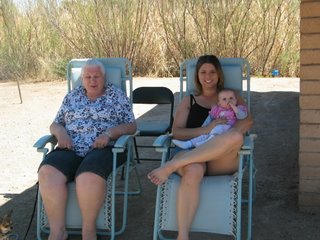 Oh wait... Becca did make it outside with out her cell phone... or did she just put it down while she took this picture? 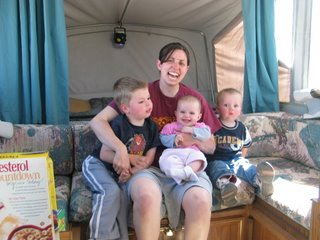 Thanks for inviting us Grandma... we had a great time!
Posted by Sara at 5:05 PM 8 comments: 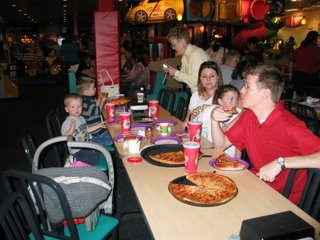 We celebrated Michael's fourth birthday at Chuck E Cheese this year... again. But everyone seems to love Chuck E Cheese.... even Scott. Michael was really excited for his birthday. In the weeks preceding it he'd ask me when his birthday was, and I'd tell him in two more weeks, or 3 more days, and he'd always say "I can't wait that long". But his birthday finally came, and now he's a big four year old. That also meant that he could get out of his car seat, and into a booster chair. He was super excited about that, especially since he got one handed down from his very cool cousin Andrew. Now he feels like a really big boy. So we had a great time eating pizza and playing games... it seemed like we had 200 tokens, they seemed to last for ever. I think Grammy even enjoyed herself. Hannah brought along one of her Nancy Drew books, and Grammy read it while we all played games. Scott had fun playing the basketball game, and even hit the 100 ticket jackpot for scoring 60 points in the time allotted. That was pretty exciting. I really like the picture down below of Michael playing Skee-Ball. He looks really intense. Michael got some cool presents too. His favorite was his "Letter Factory" game for his Leapster. He told me today "Thanks mom for getting me my Letter Factory Game. I really liked learning all my letters, now I don't have to go to school" he he he.... he's funny. 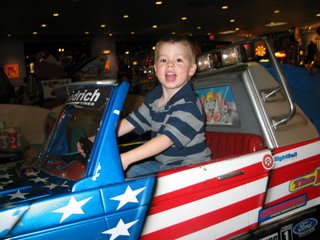 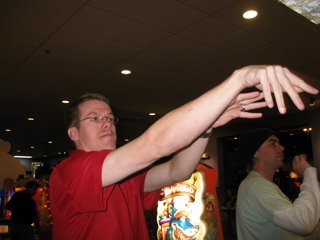 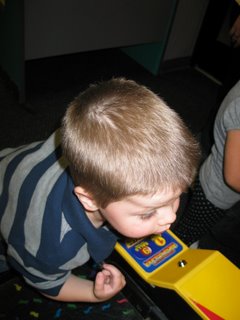 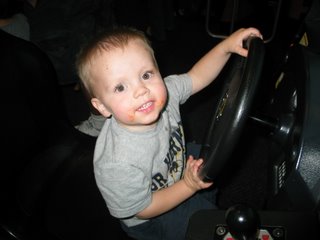 Matthew liked playing this game... even without putting in a token
Posted by Sara at 4:11 PM 3 comments: 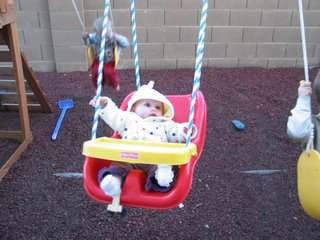 I thought these pictures of the kids swinging in the backyard were cute. This was Macey's first time swinging for real (not just sitting in there while the boys swing), and she had a lot of fun. She has a really cute laugh. We like to play in the yard a lot. The boys jump on the trampoline, swing, and Matthew likes to throw rocks in the pool. But it will be swimming season soon enough, and then they will get swim, instead of wishing that they were swimming. Actually, both of them fell into the pool this winter. But I was right there both times to pull them out. Matthew's experience was worse, because it was really cold the day he fell in. He was trying to help me rake up some leaves, and wasn't watching where he was stepping. Michael was riding Matthew's Diego bike around the pool when he fell in. Michael did a good job of not freaking out... but he's my good little swimmer. But summer is just around the corner. :) 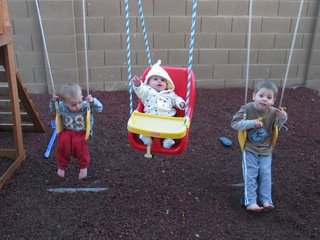 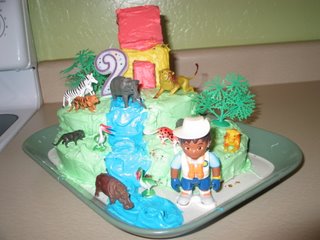 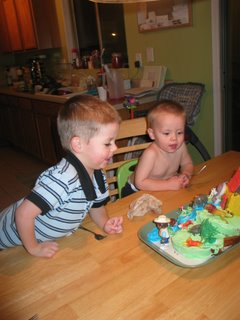 So, Matthew turned two this year. He's getting to be a pretty big boy. I made him the Diego cake, because Diego is his favorite show. I let each boy pick a movie or show that they want to watch each day, and Michael's changes from day to day (usually), but Matthew picks Diego every time. Both Matthew and Michael were pretty excited about the cake. Michael loves animals, so he liked all the animals on the cake.
Our family is lucky enough to have two Grandmothers who love all our kids very much. Here, Grandma is pretty excited about Matthew's birthday... maybe even more than Matthew is. But she gave him his favorite present of the year, a Diego dinner set. It came with a plate, bowl, a cup, and a fork and spoon set. He always wants to eat/drink from his Diego stuff.... even if it's dirty. I get lots of "why mom" when I tell him he can't use it. Matthew is a special boy. He loves riding his (you guessed right!) Diego big wheel bike, jumping on the trampoline (and his bed), playing with Michael, making Macey laugh, and reading books. 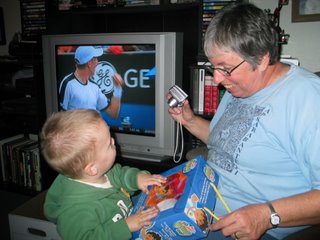