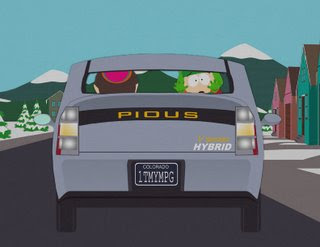 With everyone driving hybrids now, what could that giant black cloud be? .... "no... that's not smog... it's smug. It's one of the leading causes of Global Laming..."
Posted by Sara at 3:14 PM No comments: 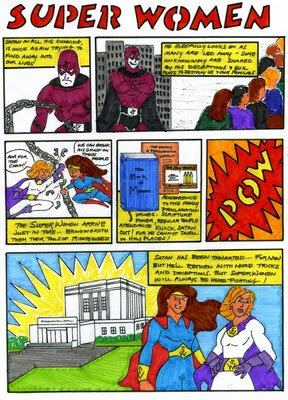 This may seem a little silly... but it's a comic strip I drew for a Home Family and Personal Enrichment meeting back when I was the Enrichment leader. I thought it would be fun to post it. It took a long time to do... so I might as well get some more miles out of it, and I had a lot of fun doing it. Some of it was traced and some of it I free handed, but of course the women super heroes needed some wardrobe updates. Their original costumes were a little less than modest, as you could imagine. The meeting was based on a talk by Pres Faust on "The Forces that will Save You" (you should read it if you get a chance). So we took a super hero spin on it. It was a good evening... I thought so anyway. Don't think I'm being sacrilegious in the strip... It's meant to make a point, while still keeping it a little light. 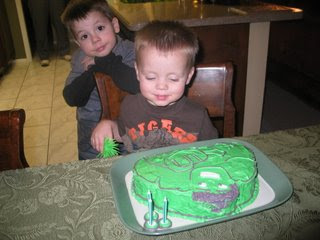 Matthew turned three on January 16th. I'm sure you all can tell how on top of this whole blogging thing I am. I generally am about a month or so late on posting anything that happens in our lives. Anyone who knows Matthew shouldn't have too hard of a guess on what kind of Birthday cake he wanted, and where we should go to celebrate his Birthday. So I made him a Hulk Smash Birthday cake.... I even dyed the cake mix green so the cake and the frosting was green. I think he liked it.... and I thought it turned out pretty good. We went up to Grammy's house for Matthews Birthday because of it's proximity to our favorite Birthday hang out Chuck E Cheese... well that, and we like spending time with "Wa Wa" as Matthew calls her. She got him a few gifts, we ate pizza, played games, and took a trip to Toys R us for him to pick something out for himself. 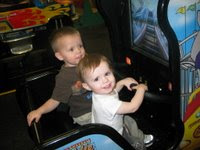 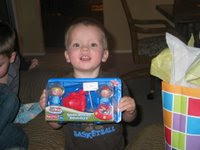 The next week my Mom, Becca, Hannah, and Andrew came down to visit, and bring Matthew some nice gifts. Becca is Matthew's favorite Aunt (sorry Dawn, Katie, and Angie), and sometimes I think he might like her better than me. I think he's secretly plotting to move to Becca's house. So needless to say he was pretty excited for her to come and visit, and Grandma and his cousins. 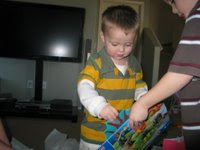 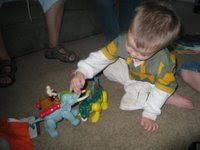 Matthew is getting to be a big boy. He wants to go to school really bad, and has a great desire for learning. He loves to play outside with Michael on our play set, jumping on the tramp, or ridding his bike. He likes to play the Leapster, and is starting to learn how to spell his name. He gets most of the right letters... just not in the right order. He's a good helper, and will get dressed by himself, and put his things away when he's asked to. I'm looking forward for another year of Matthew. He has the cutest smile, and always has a hug and a kiss for me.
Posted by Sara at 3:23 PM 1 comment:

We had lots of fun over Christmas.... here's some of our more enjoyable activities. 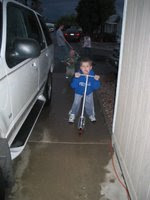 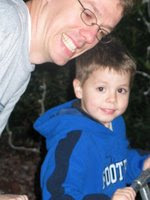 Riding scooters with Daddy, and all the cousins 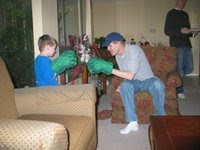 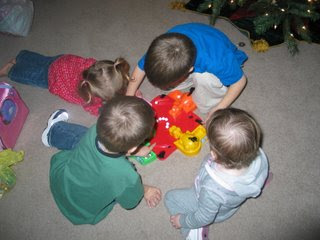 Playing Hungry Hungry Hippo with cousin Cassidy, by the way, Macey is surprisingly good at this game. 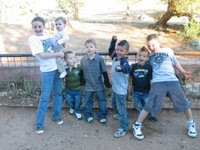 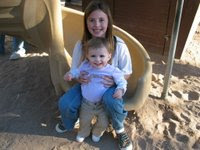 Playing at the zoo with the Montross cousins 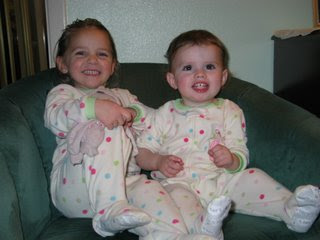 And of course, some Macey Cassidy bonding... in matching jammies
Posted by Sara at 2:52 PM No comments: