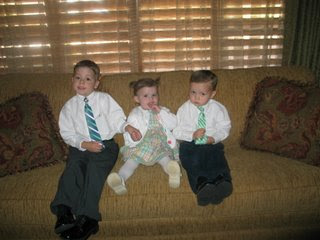 It's always a tradition to go and spend Easter with Grammy. She has an early church time so we get all dressed and head of to church before doing any Easter egg hunting. Then when they get back I don't let them change, because they look so cute all dressed up... except for Michael, who seems to get more handsome all the time. We had a great weekend with Grammy... and a great Easter dinner too. 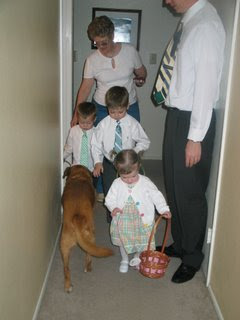 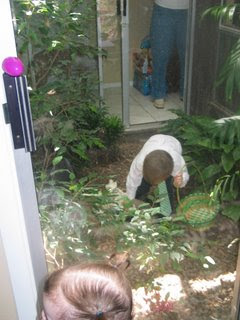 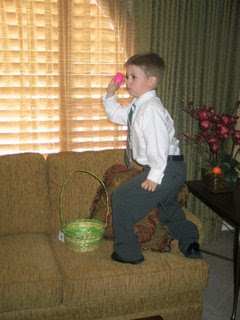 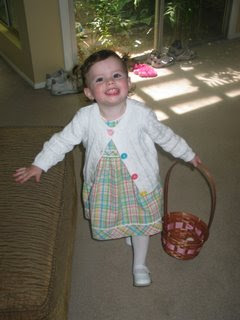 The kids had a good time collecting their eggs... Grammy has a good house for egg hunting. And Macey looked super cute in her new dress! 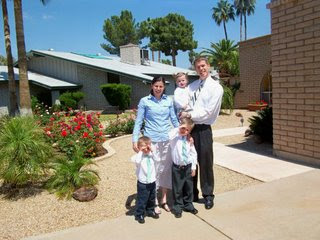 Here's our best attempt at a family photo... at least we're all looking at the camera.
Posted by Sara at 12:59 PM 4 comments: 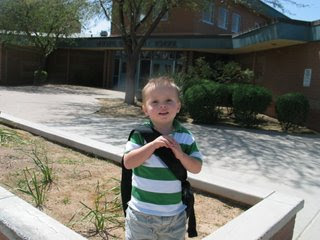 Matthew started school this past month. I think he's really enjoying going. He's attending one of the public schools here in town that has a preschool. He has a bit of a speech delay, and they have a program there to help get him on track. His teacher there is very nice, he has a big playground, and he gets to ride the school bus. He often gets upset with me if I try and take him to school, or pick him up. He insists that he needs to ride the bus two times.
Michael is a bit jealous that Matthew gets to go to a "big school" and ride a bus. But he understands that Matthew's school will help Matthew to talk better.
So that leaves me at home two days a week with just Macey, who happens to be taking a nap at that time... what luck! I always enjoy a little extra time to myself.
Posted by Sara at 3:43 PM 2 comments: 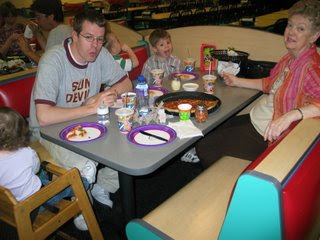 I bet everyone was wondering if we'd ever make it to ChuckECheese for Michael's birthday... well how could we skip it. It's our favorite Birthday hang out spot.... well, at least it looks like Michael was having fun.
And, as always, Grammy got Michael some really nice gifts. 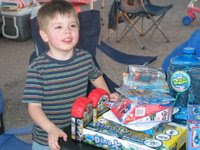 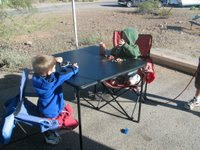 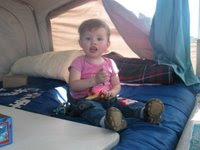 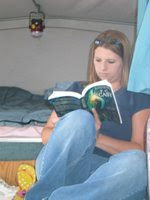 Camping with Grandma and the cousins from the Montross side is always a big hit with my kids. Scott always jokes that they got the "outside" Montross gene... where they always want to be outdoors.
Michael celebrated his Birthday again... the dinosaurs which have interchanging parts were the biggest hit. The boys played with them non stop. I even caught Macey with them. Rebecca wasn't as impressed.
Other camping highlights included: 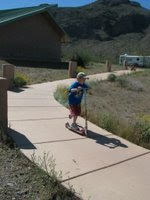 Riding (and crashing) scooters and bikes down the hill. 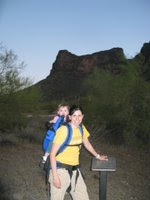 Hiking Picacho Peak... well... some of it 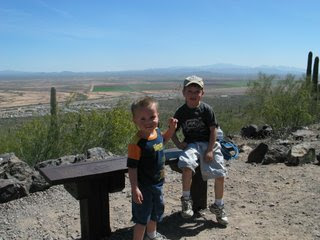 And some more hiking.
We all did survive the camping trip, with minimal injuries. Macey did fall on her face... so that pushed our family picture plans back a few weeks. After camping we left and drove to Grammy's house so we could celebrate Michael's birthday just one last time. Bet you can't guess what we did. More posting to follow.
Posted by Sara at 11:20 AM 1 comment: Michael turned five on March 16th. I'm really on top of all my blogging lately, as you can tell. He was pretty specific about what kind of cake he wanted.... although he didn't get everything he wanted.... I'm not sure there's a cake big enough to include everything on his list. He's been really into Scooby Doo for about the past year. He wanted a cake with the whole Mystery Gang, and Scooby Doo, and the Mystery Van, and all the monsters coming to get them, and Scooby-Doo written in big purple letters. Instead we settled for Scooby-Doo, the Mystery Van, and his favorite of the monsters... the Tar Monster. He was pretty excited about the results... so that made me feel a lot better about not having met all his requests. He should have been happy... he got to celebrate his birthday three times. More posts to follow.
As for Michael... he's pretty excited about being five. Anytime anyone mentions that he is getting so big, he replies... "I'm five now". I definitely think he's gotten bigger... much taller lately anyway. He really enjoys going to school, playing with his friends, and with his brother and sister. He's getting really good at ridding his scooter too. He's very sweet, and very smart. He has a tendency to want to learn about everything... so he asks lots of questions. We really love Michael.